Building America Back Better: Biden’s Agenda is Working for the IBEW

Building America Back Better:
Biden’s Agenda is Working for the IBEW

President Joe Biden proposed the largest investment in American infrastructure since World War II at the end of March, after being introduced by Pittsburgh Local 29 member Mike Fiore. Four weeks later, he renewed his call for the $2.3 trillion American Jobs Plan from the House floor, again with the IBEW at the heart of his pitch.

Today, President Biden and Congress are making their way toward passing $4 trillion in spending that will upgrade America’s flagging infrastructure, better position the U.S. as a global competitor and aggressively combat climate change.

As a result of the Bipartisan Infrastructure Framework deal reached on June 24, within grasp are plans to modernize the electric grid, expand access to broadband internet, invest and electrify the transportation sector, including public passenger rail, ports, roads, bridges and airports. The framework will create and sustain good-paying union jobs when paired with the appropriate labor protections. 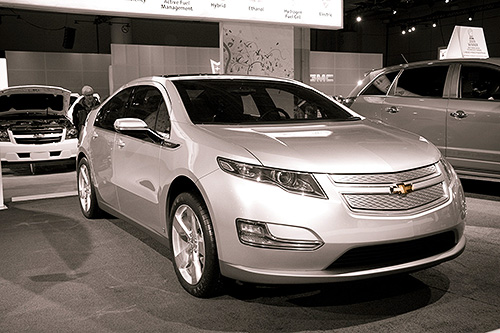 Key to this plan are 500,000 new electric vehicle charging stations and the standardization of the buildout of the nation’s EV infrastructure. The IBEW is pressing lawmakers to ensure that the Electric Vehicle Infrastructure Training Program (EVITP) is included in any legislation.

“Without proper credentialing, the EV buildout will be vulnerable to unscrupulous companies hiring unqualified workers, paying low wages and contributing to the race-to-the-bottom mentality that is already rampant in the renewable energy industry,” Stephenson said.

Read more in the July Newsletter.

IBEW was front and center in a June 4 conversation with White House officials, industry leaders and agency procurement officials about transitioning the entire federal vehicle fleet from gas-powered to electric.

IBEW’s Austin Keyser, assistant to the international president for government affairs, said when it comes to building the electric vehicle charging infrastructure, there is no better model for scaling up and training the construction workforce than the IBEW and National Electrical Contractor Association’s jointly administered program.

Vice President Kamala Harris and Labor Secretary Marty Walsh traveled to Pittsburgh in late June for the first meeting of the White House Task Force on Worker Organizing and Empowerment.

The roundtable featured Local 5 organizer Bill Garner and counterparts from seven other unions. President Biden created the task force in April, giving appointed cabinet members and top advisors six months to report back on  how the federal government can support union growth and collective bargaining.

“You had the vice president and secretary of labor walk into a union hall — our hall — and sit down with a group of union members for two hours,” President Stephenson said. “Their only agenda was to learn about union organizing from the experts, from the people who live and breathe it. The workers around the table were the VIPs that day.”

Check out the August issue of the Electrical Worker for more on this story.

Getting Another Public Shoutout from President Biden

President Biden toured the Ford electric F-150 plant in Michigan on May 18, highlighting his American Jobs Plan and the importance of remaking auto manufacturing to help curb climate change.

And once again, Biden took the opportunity to promote the key role of the IBEW in his plans for an electric vehicle revolution.

“We’re going to put Americans back to work … and that includes putting IBEW members to work installing 500,000 charging stations along our roads and highways,” President Biden said. “The IBEW is ready to do it and they can.”

The visit to the Dearborn, Mich. Ford plant gearing up to produce the Ford F-150 Lightning was planned to draw attention to the burgeoning electric vehicle market and the intensifying efforts to gather support for an infrastructure bill that includes the construction of 500,000 electric vehicle charging stations by IBEW members.

Read more in the June newsletter.

Joe Biden’s the most pro-IBEW, pro-union president in history. But don’t just take our word for it. Watch this highlight video, with clips from President Biden’s address to Congress, his comments from a meeting with labor leaders at the White House, an off-the cuff statement at a global climate summit and even a private video he made to thank the IBEW officers for their support.

At the Labor Department, Providing Steadfast Support for Unions

Policy at the Department of Labor is looking a lot different than under the Trump administration, or even under Obama.

The DOL’s anti-corruption unit, the Office of Labor-Management Standards, is going back to defending unions. Under the agency’s mandate of transparency and accountability, disclosure forms collected by the OLMS require detailed information about unions’ membership and finances.

“We know there are organizations out there who have an agenda to defeat union organizing, to reduce union power, and to generally diminish the importance of unions in the American economy,” Freund said. “And they take our data, they produce a picture based on cherry-picking examples, and extrapolate that to the labor movement writ large. And that has an effect.

It would be the first time President Biden addressed a joint session of Congress and 27 million at-home viewers – and the vision he laid out for the future was bold: ending the coronavirus pandemic, rebuilding the country’s neglected infrastructure, restarting the covid-ravaged economy.

He also made clear to everyone on April 28 what he’s been saying all along: unions hold the keys to the nation’s recovery. 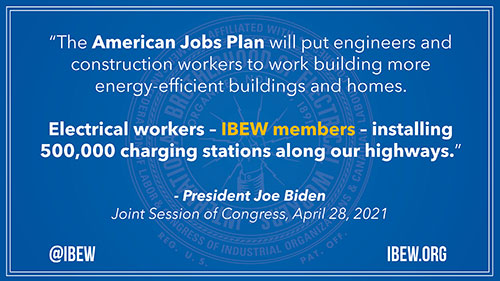 Even without the IBEW namecheck, it was one of the most pro-worker, pro-union speeches in presidential history. President Biden called for passage of the PRO Act, bringing offshored manufacturing home to the United States and boosting taxes on corporations and the wealthy to fund his plans.

In the address, President Biden also introduced the American Families Plan, which will provide investments in education from early childhood to post-secondary level and tax cuts and direct support for children and families.

“The American Families Plan is a vital investment in working families and the middle class,” said IBEW President Lonnie Stephenson. “This plan provides needed relief to working people and their children.”

Read more in the May newsletter.

Nearly 500 IBEW members virtually roamed the halls of Congress on April 12-13 in pursuit of support for IBEW priorities from elected leaders.  This effort came at a critical moment in the national conversation about the need for infrastructure legislation.

Scheduled to precede the Construction & Maintenance Conference, the Zoom extravaganza included more than 250 meetings with a clear-cut agenda: infrastructure, the broadband buildout, the power grid and labor standards. Members also emphasized the need to include the Electric Vehicle Charging Infrastructure Training Program (EVITP) in any legislation that provides federal support for construction of electric vehicle charging infrastructure. and the National Child ID Program, a community safety initiative dedicated to protecting the estimated 800,000 children that go missing each year.

The event featured hundreds of meetings with members of both parties in the House and the Senate.

“Your work always pays off,” IBEW President Lonnie Stephenson told IBEW participants following the meetings. “If there is anything IBEW members have learned in the past few years, it is when members of Congress hear a strong message from their IBEW constituents back home, they can make an important difference.” 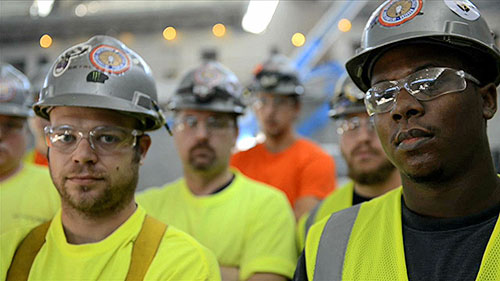 President Biden promised to put America back to work. On March 31, he shared his plan to deliver, with a historic eight-year $2 trillion package to rebuild a diminished infrastructure, battle climate change and take on global competitors.

The proposal will put the United States on the path to a revitalized domestic infrastructure while creating tens of thousands of jobs in several of the IBEW’s core sectors. Unveiled in Pittsburgh, several of Biden’s plan highlights will:

The plan will ensure that workers have the right to organize, join a union and bargain collectively and asks Congress to tie clean energy and infrastructure investments to prevailing wages, local hire rules and apprenticeship programs.

“The American Jobs plan is an investment in America’s workers and communities to not only rebuild the physical infrastructure and the battered economy but to harness new technologies to reposition the United States as a leader against global competitors like China,” said IBEW President Lonnie Stephenson. “This plan utilizes and creates jobs in nearly every branch of the IBEW’s membership.”

President Biden traveled to Pennsylvania to announce the plan. He was introduced by Pittsburgh Local 29 member Mike Fiore, a lineman employed by Duquesne Light, who spoke of the universal recognition for the need for the Build Back Better plan.

Once, Pennsylvania was a global leader in manufacturing and good union jobs, Fiore said. “It can be that way again. President Biden has a solid plan to make it happen.”

Helping America Dig out from Under the Pandemic

President Biden signed $1.9 trillion American Rescue Plan on March 12, sending more stimulus checks, help for vaccine distribution and re-opening schools to individuals and states and communities to hasten the recovery from the year-long pandemic. Critically for the IBEW, this bill also provides a fix for multiemployer pension plans.

Provisions in the bill include:

The popular legislation passed the Democratic-majority House of Representatives and Senate without any support from Republicans. It is Biden’s top priority, and it was accomplished in his 50th day in office.

Read more in the April newsletter.

IBEW President Lonnie Stephenson was among several leaders to meet with President Biden and Vice President Kamala Harris in the Oval Office on February 17.

“Today’s meeting with President Biden was enormously productive in addressing how the labor movement can work with the administration in putting Americans back to work and creating good-paying union jobs,” President Stephenson said of the 90-minute meeting.

President Biden fulfilled a campaign pledge by launching a sweeping review of the country’s supply chains with an eye to beef up domestic production of computer chips, medical gear, electric vehicles, electric vehicle batteries and other materials critical for defense, energy, transportation and information technology. 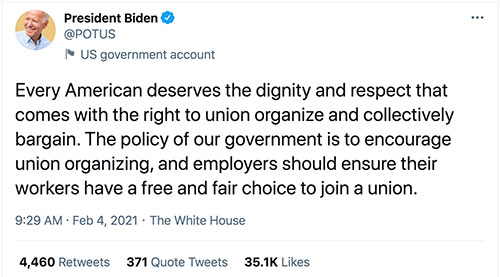 On the eve of a historic union vote at Amazon, President Biden released a video February 28 stating the administration’s full support for organizing.

“Every worker should have a free and fair choice of whether to join a union,” Biden said in the video. “There should be no intimidation, no coercion, no threats, no anti-union propaganda.”

It would be the biggest to change labor law since the National Labor Relations Act gave workers the right to organize. And President Biden is all in, he told IBEW leaders in a video he made for the IBEW Officers Meeting on February 1.

“Every American deserves the dignity and respect that comes with the right to organize and collectively bargain. The policy of our government is to encourage union organizing, and employers should ensure their workers have a free and fair choice to join a union,” Biden tweeted on February 3.

President Biden supports the re-imagined and improved Butch Lewis Act, the IBEW-supported legislation that would assist ailing multiemployer pension plans. A previous version of the bill passed the House of Representatives in 2019, though not the Senate. Now, legislation based on Butch Lewis is included in the $1.9 trillion coronavirus relief bill that was signed into law on March 12.

It will help shore up troubled plans and avert a looming funding crisis for the Pension Benefit Guaranty Corporation as a result of possible plan failures. Most of IBEW’s multiemployer plans, including the National Electrical Benefit Fund, are in good shape.

“This version of Butch Lewis is everything we asked for, and more,” said IBEW International Secretary-Treasurer Kenny Cooper. “This is an issue that has kept me up at night for years. There were times when others thought we should negotiate the best deal possible with the Republicans, but we knew those deals would have fundamentally changed the pension system in a way that would have destroyed our plans.

Powered by Convert Plus